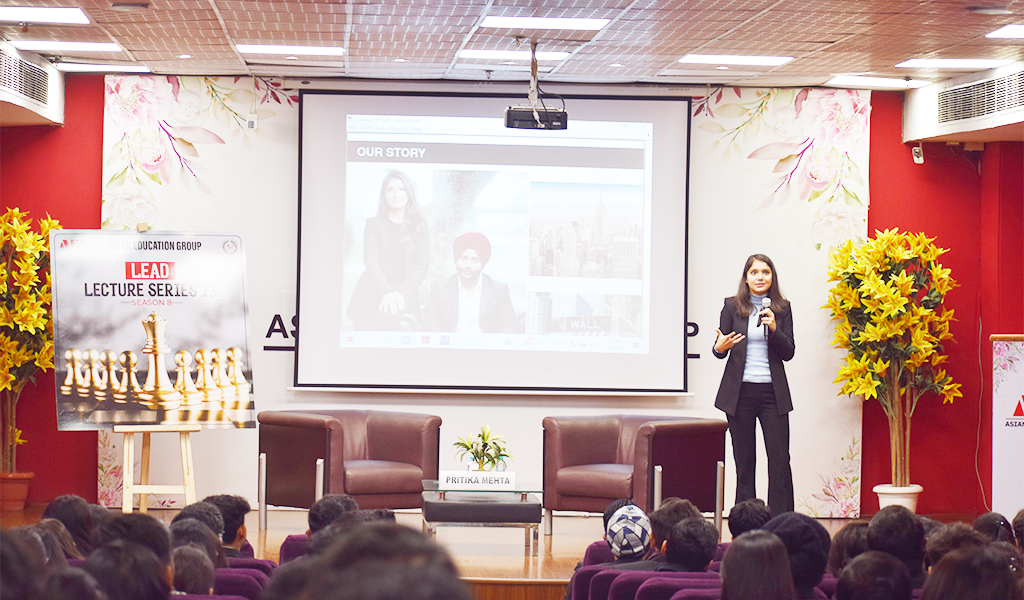 Asian Business School, Noida under its lead lecture series organised a guest talk by Ms. Pritika Mehta, Founder of SOCKSOHO, on January 17th, 2023. Ms. Pritika captivated the audience with her story of founding SOCKSOHO, discussing the challenges she had in the beginning and informing the students about seed capital, venture capital, and angel financing. She promptly responded to all the questions and inspired the students to work diligently to achieve their goals. During the ceremony, the Grand Finale of Young Asian Entrepreneur of the Year 2023 was also introduced, and the winner of Young Asian Entrepreneurial Challenge – Arun Das was felicitated by Ms. Pritika Mehta and was awarded with the tag of one of the Finalists of YAETY – 23. Arun got the chance to interact with Ms. Mehta and she gave him the advice and suggestions to make improvements in his Business Plan for the Finale of the Event.

Ms. Mehta had a small conversation with the other students as well and she give them her wise insights for the inclusion in Business Plans. Ms. Garima Malhotra also had a fun filled session with her where she asked questions in relation with Entrepreneurship, Startups, Ventures in a Quick Rapid-Fire round, which she responded very enthusiastically and off course the students were able to learn more from this quick session.

She explained the students about the importance of E Business, E Commerce and how can Gen Z engage themselves into such opportunities, which are available now at ease and off course few years back how much it was difficult to reach out people. Ms. Mehta told students that how much fortunate she was to open up her venture and take important decisions of her life and emphasised that each one of them also should have that capability of making their own Decisions.

In the end Mr. Ravi Sharma delivers the vote of thanks in which he thanked her to accept the invitation to enlighten the students of Asian Business School with her wise words towards entrepreneurship. Mr. Ravi also invited her on the Advisory Board of EDIC – ABS, which she readily accepted and felt honoured, and as the Session concluded, Dean ABS, Dr. Shweta Batra, felicitated Ms. Pritika Mehta with the Memento.