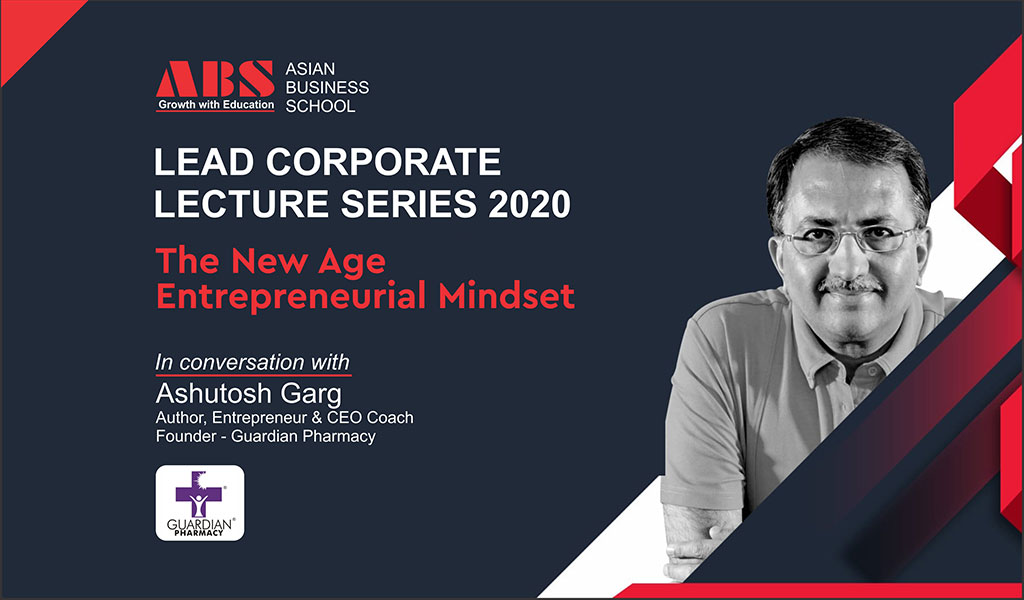 Mr. Ashutosh Garg, an MBA, worked for ITC Limited for 17 years, leaving it in 1995 as Managing Director of one of the ITC group companies, based in Singapore. Thereafter, he spent 8 years in the aerospace industry. He founded Guardian Pharmacy in India in 2003 and grew it to the second largest pharmacy chain in India. He also brought in GNC as a partner to India. He exited from the company he founded in August 2016.

Mr. Ashutosh served as a director of the GAVI Vaccine Alliance for 8 years. He is Chairman of Bizdome, a Startup Incubator of the Indian Institute of Management, Rohtak. He has also served on the Advisory Council of the Centre for Policy Research and continues to serve on the boards of several companies.

He was recognized as a Global Leader for Tomorrow by the World Economic Forum, Switzerland. He is an active member of the Young Presidents’ Organization and is the Chairman elect for YPO Gold, South Asia for the period 2017 – 19.

He has written 5 highly acclaimed best sellers titled “The Buck Stops Here – my journey from manager to entrepreneur”; “The Corner Office”; “Reinvent Reboot Rewire. Managing Retirement in the 21st Century”; “The Buck Stops Here – Learnings of a Startup Entrepreneur” and “An Eye for an Eye”. He writes regularly for various online publications like Times of India, Business Insider, Inc., Entrepreneur, The Quint and Big Decisions.

An avid golfer, Mr. Ashutosh plays the Indian flute and enjoys reading and listening to Indian classical and vocal music.

An initiative of Asian Education Group (AEG) – considered as the largest centre for professional media, IT, law, management, fashion & hospitality education in Asia with world-class facilities – this webinar was organized by Asian Business School (ABS) ) – which is a constituent group college of Asian Education Group and is ranked as one of the best B-schools in Delhi NCR – for all PGDM/MBA students & aspirants. The webinar was followed by a lively Q&A Session with the illustrious guest.

The live session commenced with a welcome note, followed by a brief but highly impressive introduction of the illustrious guest by Ms. Garima Malhotra on behalf of the AEG family. Thereafter, Mr. Ashutosh Garg took the virtual centrestage and at first thanked the ABS Team for inviting him for this interactive session with students, which he said was something that he “loved to do in his life”.

Mr. Ashutosh Garg then began his talk by recounting his own background of having been born in a much decorated army officer’s house (his father being a retired Brigadier honoured with AVM & Kirti Chakra) and his growing up years along with his two brothers. He remembered how his parents always told them that “they will never be able to leave a lot of wealth for them but will give them good education and good values that will never let them down in life.” He then spoke at length about his school and college days, his distaste for Biology and his love for English, his failure in qualifying for medical college admissions as desired by his family elders, his undertaking of B.Com (Hons.) and MBA from Jamnalal Bajaj Institute of Management, his placement at ITC Ltd., his different jobs like the one at an aerospace company, his  quitting of the corporate world in the year 2003, his taking up of writing as a profession, and his starting up of a new entrepreneurial venture by the name of Guardian Pharmacy that grew into the second largest pharmacy chain in India.

Following this engaging and engrossing narration, Mr. Ashutosh Garg opened the session for questions from the students. A shower of questions related to the topic of the day – viz. “The New Age Entrepreneurial Mindset” – as well as his life, struggles and achievements were put up by the students to which the eminent speaker provided the most convincing answers.

Towards the end, in his message for the ABS students aspiring to fulfill their entrepreneurial ambitions, the distinguished guest said, “You are all young management students … move into the world out there. Don’t think of only India in this boundary-less world. The whole world is now yours. Do things right. Do things correctly. And always remember that success and failure are two sides of the same coin!”

Once done, Mr. Ashutosh Garg was presented with a glittering “Memento” on behalf of Asian Education Group, which was greatly appreciated by the honourable guest.