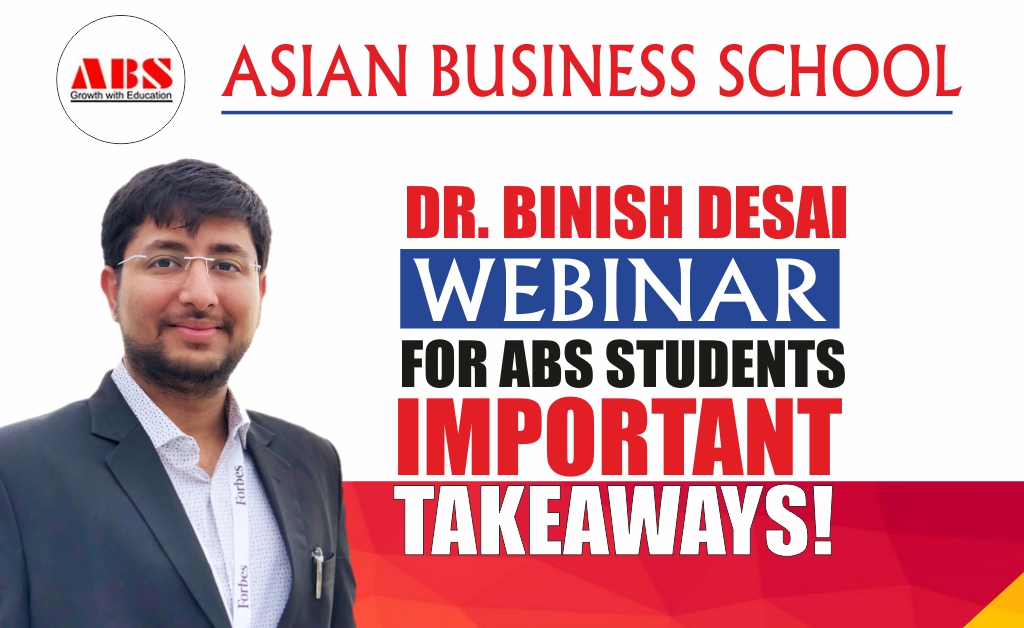 Asian Business School (ABS) organized a highly inspiring Live Interactive session with none other than DR. BINISH DESAI, Social Entrepreneur & Innovator – more famously known as “THE RECYCLE MAN OF INDIA”– for all PGDM/MBA students and aspirants on Saturday, 5th September 2020 at 12:00 noon. As it unfolded, the WEBINAR became a spring of great inspiration and learning for all PGDM students and aspirants with entrepreneurial dreams in the all so important socio-environmental domain of our human existence!

Dr. Binish Desai is an Indian environmentalist, innovator and social activist from Gujarat. He is known as “Waste Warrior” and “Recycle Man of India” for recycling more than 917 tonnes of industrial waste. Dr. Binish Desai is a Padma Shri nominee 2018. He is the founder of Eco-Eclectic Technologies. He has also been praised for his work by former President of India late Dr. Abdul Kalam. Dr. Binish strives to clean India and is the part of Swachh Bharat Abhiyan, a nationwide campaign launched by Hon. Prime Minister of India, Sri. Narendra Modi in 2014. He is also in the list of Asia’s 2018, Forbes 30 Under 30. One of his famous quotes is, “Nothing is useless in this world; what can be a waste to you is someone’s asset!”

Under the Eco Eclectic Technologies, Dr. Binish has recycled 917 tonnes of domestic & industrial waste. So far his recycling work has reduced carbon emissions by 1300 metric tonnes. He invented P-block bricks, made from the waste produced by paper mills. He uses 49 different types of waste materials to create building materials. He has built 70 homes and 1000 toilets for poor citizens in slum areas of India till 2019. Bricks made with industrial waste have a shelf life of 80 years.

Dr. Binish has also invented eco-friendly lamps and chandeliers which are made from secondary paper sludge waste. This is called Eclectic Mini. 7kg of waste is used to make one eclectic-mini. His other inventions include Paver blocks made from Metal, textile and paper waste, furniture panels made from human hair, sound proof panels made from fabric lint. Vitrified tiles made from various waste, absorbent, artificial wood etc.

An initiative of Asian Education Group (AEG) – considered as the largest centre for professional media, IT, law, management, fashion & hospitality education in Asia with world-class facilities – this WEBINAR was jointly organized by Asian Business School (ABS) ) – which is a constituent group college of Asian Education Group and is ranked as one of the best B-schools in Delhi NCR – for all PGDM/MBA students & aspirants. The WEBINAR was followed by a lively Q&A Session with the famous young guest.

Delivered under the aegis of its “Leadership & Entrepreneurial Aspiration Development (LEAD) Program”, the session commenced with a welcome note, followed by a brief introduction of the honoured guest by Ms. Garima Malhotra on behalf of the AEG family. Thereafter, Dr. Binish Desai took centre stage.

Dr. Binish Desai began his session by greeting the student participants and thanking the host for his introduction. He then went on to his story of “stupendous journey of a 10-year-old boy to becoming a waste warrior” by stating that he has always believed that the concept of waste does not exist. He said, “Hundreds of years ago, waste was naturally recycled by nature, but in modern times, materials have become complex and hence it has become all the more important to work for its proper recycling.”

He then recounted how he started his journey as an environmentalist at the age of 10 by getting inspired from his childhood cartoon character “Captain Planet” and “Dexter’s Lab” and created the first P-brick using industrial paper waste and chewing gum in 2005 at the age of 11. He further remembered how he founded an eco-friendly and waste management company (B-Dream) at the age of 16 in the backyards of his house garage that culminated in his founding of Eco-Eclectic Technologies in 2016.

Dr. Binish Desai specially talked about the several challenges that he surmounted on his way to achieve his goal of making a good difference in the lives of people and, more importantly, the environment by way of his ventures into the “taboo domain” of waste management.

Dr. Binish Desai then opened the session for questions from the students. A shower of questions related to his life, struggles and achievements were put up by the students to which the eminent speaker provided the most convincing answers.

Thereafter, the session entered into the last leg with a review of AEG’s “Eco-Club” activity submissions made by students as part of the “INNOWASTE Competition 2020” grand finale proceedings. Out of several presentations, 5 were shortlisted for consideration of the winner of this competition.

Dr. Binish Desai confessed that he was impressed with the “amazing ideas” presented at this competition and said that “all 5 shortlisted submissions had the potential to become great environmental initiatives.” Stating that it was difficult to choose one among them as best, he declared two winners – namely, Ms. Ankita Badauni in the ‘Creative’ category and Mr. Vikas Yadav in the ‘Innovation’ category.

Once done, Dr. Binish Desai was presented with a glittering “Memento” on behalf of Asian Education Group.

With this, this most inspiring session with the young, dynamic, social entrepreneur and innovator, Dr. BINISH DESAI – more famously known as “THE RECYCLE MAN OF INDIA”– came to a fitting end!