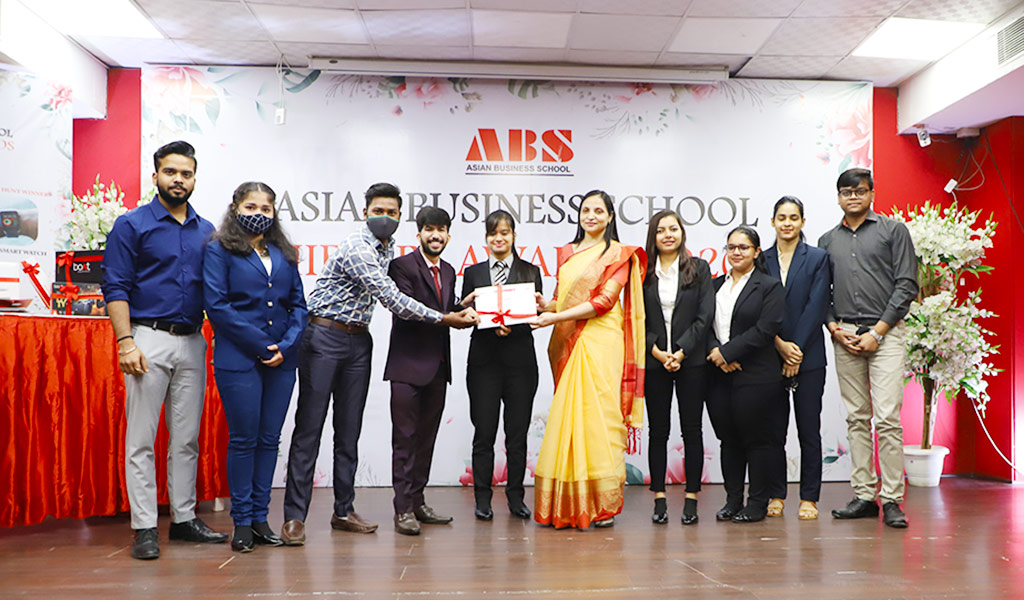 Asian Business School celebrated the sterling achievements of its talented young students in various competitive events spread over the space of the last 15 months or so by way of a sparkling “ABS Achievers Award Ceremony 2020-21” on Saturday, 13th March 2021 at its campus located in Sector 125, Noida. The period of reckoning included the whole of the “Year 2020”, where the world was probably a little less paced and energetic, but Asian Business School and their students left no stone unturned to use that time as effectively as possible. In fact, ABS students truly showcased that the new normal could be no less exciting and where there is a will, there is a way. The ceremony appreciated all ABS students for showing this immense amount of zeal and enthusiasm not just in academics, but in extra-curricular as well.

The event profusely appreciated all the achievers for their enthusiastic performance and great talent. It awarded not only the ABS students for their creativity and talent, but also applauded the ABS teachers and faculty members who had consistently guided the students and exuded their energies towards guiding them.

Before the commencement of the award ceremony, a video was played that offered a little glimpse of how glowingly the ABS students had come out through all the various competitive events during those challenging times. This mesmerizing video energized all those who were present and motivated each one of them to never stop, but expose oneself to various opportunities given to them. It also proved that the agenda behind hosting such activities is to help our students hone leadership skills, flexibility and determination, self-confidence and belief and lastly respect and sincerity.

The ceremony started with the awards for “EXUBERANCE 2021: A prelude to Kesshet (ABS’s Annual Fest) and Athleema (ABS’s Annual Sports Meet)” that was held on Saturday, 6th March 2021. The exciting and eventful day had seen the cultural programs being conducted in the college auditorium, while at the same time, the sports events were taking place in the sports ground. Among the cultural events, there were a mix of activities like Dance (Solo& Group), Singing (Solo& Group), Nukkad Natak, Photography, Stand-up Comedy and Art Gallery. And in sports, there were 100m Race, Badminton, Volleyball, Tug-of-War, Chess and Carom, which the students enjoyed a lot. The best of the activities were judged as the winners. The winners for the various sports events were Sagar Kumar for 100m Race; Sheenam Shah for Badminton (Girls-Single); Manju Dahiya & Sakshi Sharma for Badminton (Girls-Double); Kuldeep Singh for Badminton (Boys-Single); Team of Jagat Singh, Manish Singh, Ankit Dubey,  Amresh Kumar Singh,  Sagar Kumar, Ashish Naula for Volleyball; Team of Manish Singh, Rajeev Singh, Deepak Sharma, Shyam Kumar Sah, Rishab Dhawan, Vaibhav Garg, Purusharth Singh, Nitish Singh,  Anisha, Bhavya Purohit & Ankita Badoni for Tug-of-War; Tejaswee Singh for Chess; and Anant Singh for Carrom.

The ceremony then set about recognizing ABS students who not only excelled at internal events, but with their proactive approach, they represented their college outside and came out as the shining stars:

The ceremony then moved on to its most awaited segment where it was to award the individual winners of the grandest events that took place in the session 2020-21. To do the honours, Mr. Saurabh Sharma (Director AEG) and Mr. Gurdeep Singh Raina (Director AEG) – the pillars of AEG who have always supported the students’ development with all responsibilities – were welcomed on stage.

The ceremony then moved on to its last leg where ABS faculty members received their due share of awards and recognition for conceiving and conducting all these outstanding competitions that brought out the best among the ABS students. These Faculty Awards were given as follows:

Following this, the sparkling “ABS Achievers Award Ceremony 2020-21” came to an end.