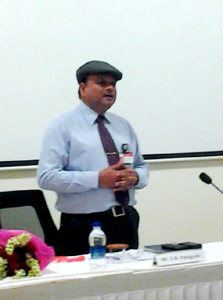 On 14th June 2013, Mr. S. N. Panigrahi AGM-HR at NTPC Ltd. was invited for the distinguished lecture series. An expert orator, he delivered a lecture on “Importance of HR specialization in current business scenario”. He guided the students for reasons why to select HR as their specialization and also the skills required in students in order to take HR as their career. He also explained about the different roles and responsibilities which an HR person has to handle in the corporate.

As far as Mr. S. N. Panigrahi’s career, during his initial posting at Talcher Super Thermal Power Project of NTPC in Odisha 1990-91,he looked for Recruitment & Establishment with Training, HRD, General Administration & Township Administration and Industrial Relations & Welfare along with an exclusive assignment of Land Acquisition. He was also the designated Estate Officer of the project.

On transfer to the Corporate Office of NTPC in New Delhi, since July 2003, he was working as member of the Core team exclusively constituted with professionals from our Human Resources and Information Technology Departments responsible for implementation of one of the world’s best software package on HRM, ie. People Soft HRMS and thereby raising the standard in terms of quality of services and the efficiency of the HR Department. Subsequently, he was working as an active core ERP-HR team member responsible for implementation of SAP and contributing for process simplification, development of Business-Process, Blue Prints, Data-Migration, Training and Change Management exercises etc. On 17th April 2008 he joined NTPC/VSTPS, the biggest power plant of the country as on date as the 2nd in-command of HR Department. On transfer from Vindhyachal STPS, joined APCPL/IGSTPP, Jhajjar, Haryana on 06th June 2011 as the Chief Manager (HR), heading the HR Department, of the project promoted as Dy. General Manager(HR) w.e.f. 1st October 2011. Then joined the Corporate office on 5th March 2012 in the ‘Security & Coordination Depts. Recently re-designated as Additional GM (Security & Coordination), coordinating both Security and Land Acquisition function at CC under the ED & Corp. Head (Security & Coordination) in Corporate HR.