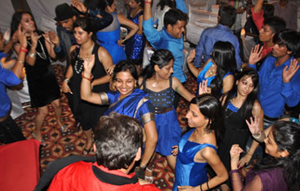 Students of ABS organized an opulent fresher’s welcome party for the batch of 2012. The party was organized with aesthesis of care, the fascinating outcome of this event made the fresher’s as an integral part of the ABS family. With smile on the face and high spirits in heart, the seniors of ABS hosted the welcome party for the new aspirant of ABS. The party was organised in campus on Saturday, September 1, 2012. With energetic ambience, flashing lights and foot tapping music the fresher’s party began with the radiance. All the students were outshining with eclectic dress sense permutation. The excitement augmented with the presence of Prof. Sandeep Marwah President, Asian Education group and Ms Joyshree Arora renowned actor from Bollywood.

The program was initiated with the lightening of the lamp by the eminent guests. The students showcased their talent in a magnificent way. Thereafter the students welcomed the guest with a traditional dance performance from Assam which was mesmerizing. The most awaited moment for students was the accolade for the participation in the orientation program. The students were appreciated for their sincere efforts with certificate and prize. No one wanted to miss this opportunity in any way so did the students. The students with the believe in the saying of Aristotle “Those who educate children well are more to be honored than they who produce them; for these only gave them life, those the art of living well.” The students of ABS with the same philosophy prearranged a short show to appreciate and honour the efforts of all the academic staff wherein the academic staff was presented with mementoes by Prof. Sandeep Marwah.

The evening became more vibrant with the fashion show where the fresher’s walked on the ramp in a graceful manner. The fashion show with talent performance and question & answer round culminated to selection of Mr. and Ms. Fresher 2012. The judges declared Mr. P S Akshay and Ms. Rashmi as Mr and Ms. Fresher of ABS-2012.
The evening finally was left with beats of the music where the students were left to rock with the DJ. As the mercury began to rise, the dance floor was left open for some unconcealed exuberance.