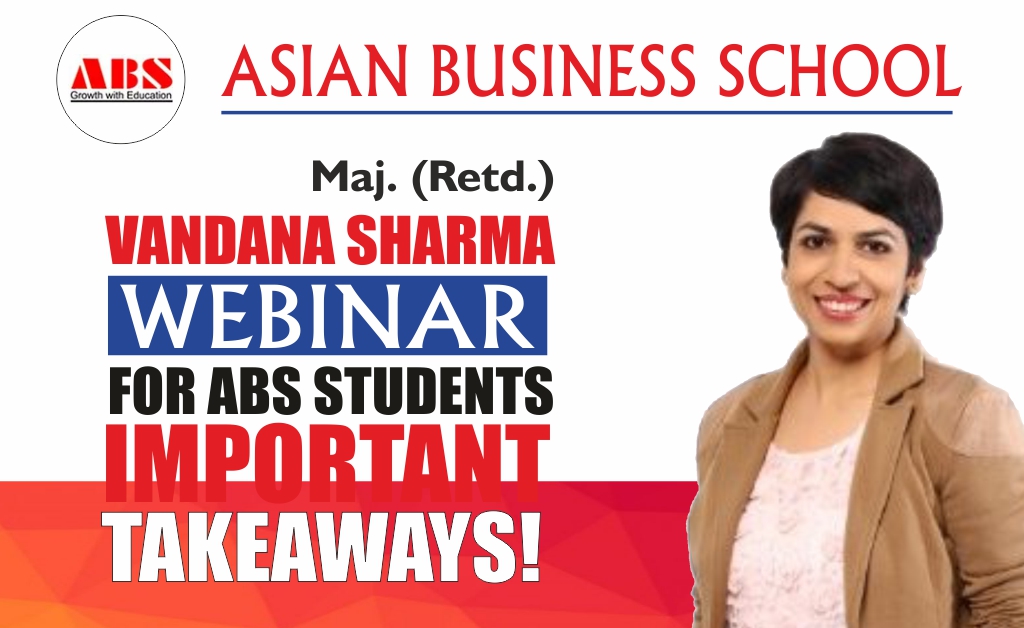 Major Vandana Sharma, an ex-Army officer, is a senior industry leader, offering 24 years of rich and diverse experience across Strategy, HR, Resource Management, General Management, and Operations. Major Sharma played a back end role in the Kargil War, 1999. Her contributions include many value chain projects and people initiatives across organizations like Indian Army, Wipro, GMR Group, TNT and Myntra.

An initiative of Asian Education Group (AEG) – considered as the largest centre for professional media, IT, law, management, fashion & hospitality education in Asia with world-class facilities –  the webinar was followed by a lively Q&A Session with the distinguished guest.

The webinar session opened with the distinguished guest thanking ABS for this opportunity to interact with the students and her honest confession of feeling embarrassed at the impressive introduction of her life and achievements.  She said that she belonged to the same background as many ordinary individuals, only that she chose a non-conventional career in the Indian army. This, according to her, happened because of her family background where her father was in the Indian Air Force and several of her other family members were also a part of the Indian Armed Forces in some capacity or the other. Thus, there were role models available right in the house who inspired her to take up a career in the Indian Army. Over a period of time, life evolved for her through a succession of careers and accomplishments, albeit with its share of pitfalls and defeats as well.

Referring to the topic of the day’s webinar, viz. “BEING A WINNER”, Major Sharma then put worth a counter question – “What is success, victory, and winning?”

Answering the question herself, she said, “The definition of success changed from my early days to today. Everything varies. For some people, success means money; for some other, fame; and for few others, it may mean making an impact.”

According to her, “the definition of success also changes as per the different stages of one’s life. And the only difference between one who makes it and the one who can’t, is about DECIDING and chasing a GOAL!” She further stated that “Successful people do something NEW, and they keep moving on from one accomplishment to another.”

Major Sharma then recounted her life story in detail, beginning with her “blessed childhood” when she “always wanted to be everywhere”, to her simple college life pursuing an ordinary graduation degree, which got invigorated with the Indian Army opening up for women candidates and her jumping in wholeheartedly at the lifetime opportunity.

She then spoke at length about the training as an army recruit, her commissioning as an officer, her posting in the forward areas of Leh & Ladakh, the Kargil War, the actual war experiences, the casualties, the burnings, the short deadlines, the deaths, the martyrs … all of which changed her as a person and made her feel truly grateful to God for being alive!

However, she had to change her career at this stage, having exhausted her contractual years of service at the Indian Army. She then underwent a lot of “experiments” in the corporate world, taking up jobs & responsibilities in the HR, Logistics, Strategy, Operations, Franchise, Retail and finally to the current start-up, STREE.

The audience heard her story spell-bound and were truly moved by her grit and determination at making the most of her life!

Major Vandana Sharma then opened the session for questions from the students. A shower of questions related to his life, struggles and achievements were put up by the students to which the distinguished speaker provided the most convincing answers.

Towards the end, in her message for the ABS students, Major Sharma said, “Be original. Be individual. Be happy. Don’t try to be perfect. Just be happy.” She wished the students “All the Best” and thanked the Faculty and Management of AEG for giving her this opportunity to share and interact.